Today we’re marking the International Day of Women and Girls in Science by celebrating the many women who bring a wealth of scientific experience to their role at the Maritime and Coastguard Agency. Autonomy Technical Specialist Ruth Taylor (pictured below) is one such person.

Part of the Maritime Future Technologies team since January 2021, Ruth is passionate about bringing cutting edge technology into current working practice. Drawing on her background as a naval architect, product manager and system engineer, she’s always on top of the latest innovations in autonomous shipping and working to ensure that these advances are reflected in legislation and guidelines.

Ruth said: “It’s fascinating work, really futuristic stuff. The world of autonomy is progressing so quickly that we’re needing to keep pace with that and ensure that there aren’t legislative barriers there which could slow things down. “One of the things I love about my job is the fact that I’m working with so many amazing technical women in the team. I was one of only a handful of women on my course when I studied ship science at Southampton University and I’ve definitely felt that I’m in the minority at times during my career.”

After completing her Ship Science degree, which included a semester at the Webb Institute, a New York engineering college which specialises in naval architecture and marine engineering, Ruth began her career on a graduate scheme in Plymouth dockyard. There she took on a number of roles working with nuclear submarines, surface ships and the Royal Navy.

Ruth went on to work for L3Harris, a company which designs, builds and operates remotely operated vessels, where she made her way up the ladder from naval architect to project manager to system engineer and developed a passion for autonomy, which she brings to her current role in the Maritime Future Technologies Team. “Engineering is for everyone” said Ruth. “It’s an open playing field and there isn’t just one way into a role in science or engineering.
“A willingness to be hands on and a genuine passion for what you do is key. If the traditional academic route isn’t for you there are any number of different routes into the industry, such as apprenticeships or taking opportunities to gain experience while in different roles. And it’s a great industry to be part of.” 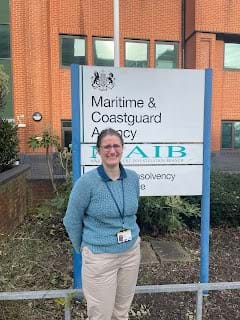